It’s been 7-months since we got a new project from DaBaby, today he hints new music on the way as we remain in isolation. 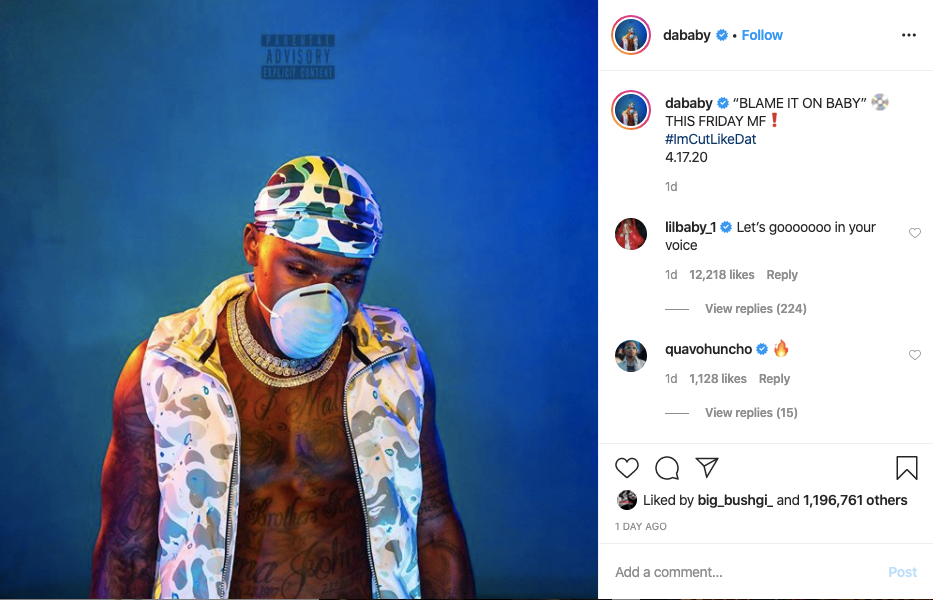 Suge, also known as DaBaby is promising some new music drops this weekend. It has not been said if the music drops are a single or a music compilation project.  Either way with all the buzz DaBaby has been generating it would make more sense to drop an EP post ‘Kirk.’  DaBaby’s most recent release was a feature on Lil Yachty ‘Oprah’s Bank Account‘ which made its charting debut last month.  if all goes as planned we will be receiving some new work from Charlotte, N.C hometown rapper.

His latest project ‘Kirk’ was released in September 2019.  The leading single ‘Suge’ has received a double-platinum plaque also racking up over 216 million streams on Spotify.  Meanwhile, the album ‘Kirk’ has been titled a platinum album to date moving over a 1-million units.  While Baby on Baby is the debut studio album by American rapper DaBaby. It was released on March 1, 2019.

While the project will get a deserving spin, it will not receive the accolades as various artists rush to fill in the blank with streaming fans.  What is an ‘essentially mixtape’ project will not build a buzz for DaBaby.  DaBaby is better than this and the label by-all-means could maintain a rollout schedule for each song versus just throwing a mixtape out for the hell of it.   Lockdown does not mean you can take advantage of listeners but create the opportunity to be more creative and pace yourself.

[bctt tweet=”It’s been 7-months since we got a new project from DaBaby, today he hints new music on the way as we remain in isolation.” via=”no”]