If you’re old enough to remember Bill & Ted’s ‘Awesome Adventures’ then you would find this a treat, of not well you would be able to appreciate the fact that Kd Cudi our favorite musician has locked in a pretty significant role in the production of the upcoming film.

According to movie sites the anticipation for the upcoming movie is expected to be released on August 21st, 2020 along with  Alex Winter and Keanu Reeves who were the original ‘Bill & Ted’ actors. Alex has appeared to have reached out to Kid Cudi on Twitter to congratulate him, revealing his appearance has been five years in the making.

According to Forbes – The iconic duo will set out on a new adventure when a visitor from the future appears with a dire warning. Only their song can save life as we know it and bring harmony to the universe. Along the way, Bill & Ted will be helped by their daughters, old friends, new historical figures, and a handful of music legends. 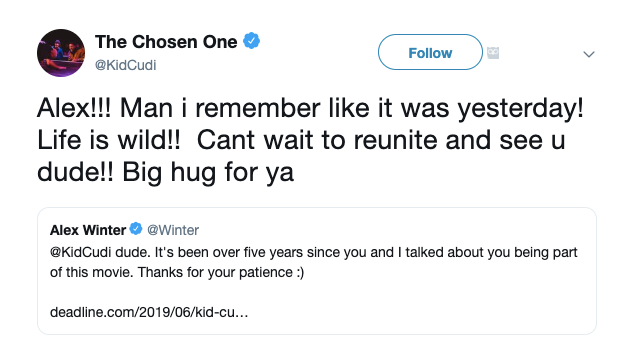 The film is a sequel to 1991’s Bill & Ted’s Bogus Journey, and its original draft was completed in 2011, and while Cudi is no stranger to acting as he once starred in the series ‘How To make It In America’ seen below.