The revival of the classic horror flick kicks off with a dare to say ‘Candyman’ name in a sequence as the first trailer debut.

The classic remake unfolds another chapter of Candyman.  As the story is told the horror began with a simple dare originally in 1992. Fast forward 2020 the summer campaign for the movie is scheduled for a June 2020 premiere date.  Jordan Peele and Universal Films took the first steps today to debut the trailer for the epic summer film with social media’s first dare.

The film is based on Clive Barker’s short story ‘The Forbidden’. Tony Todd originally cast as “Candyman”, a supernatural entity. The legend claims that Candyman can be summoned by saying his name five times while facing a mirror.  Whereupon he murders the summoner with a hook jammed in the bloody stump of his right arm. the name ‘Candyman was given to him when as the story is told, he was smeared with honey stolen from an apiary, prompting the locals to chant “Candyman” as hungry bees stung him to death.

Before publishing the first trailer to the movie, Peele promised that those who completed the task would be rewarded with an “exclusive first look” at the sequel to the 90’s horror. Are you up to it? 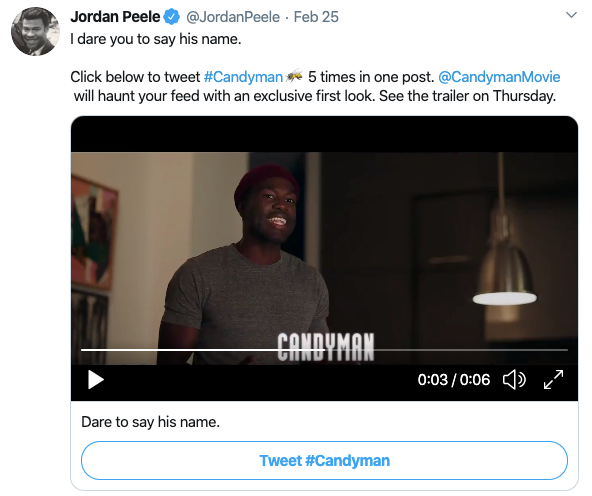