Pusha T on recent music leaks from the Good Music camp indicates someone from Def Jam is a part of the conspiracy before the weekend is up.

Before the weekend was over, Pusha attended Sunday Service with Kanye at the Howard U campus.  Unfortunately, it was quickly back to business.  As Pusha T took to Twitter Saturday night to address recent music leaks from the Good Music label.  While he insinuates the issue at hand is internal, he does not know the specific person in question responsible for the music leaks being addressed.  Further promising in his tweet the would be person along with any help they might have had would be made an example of. 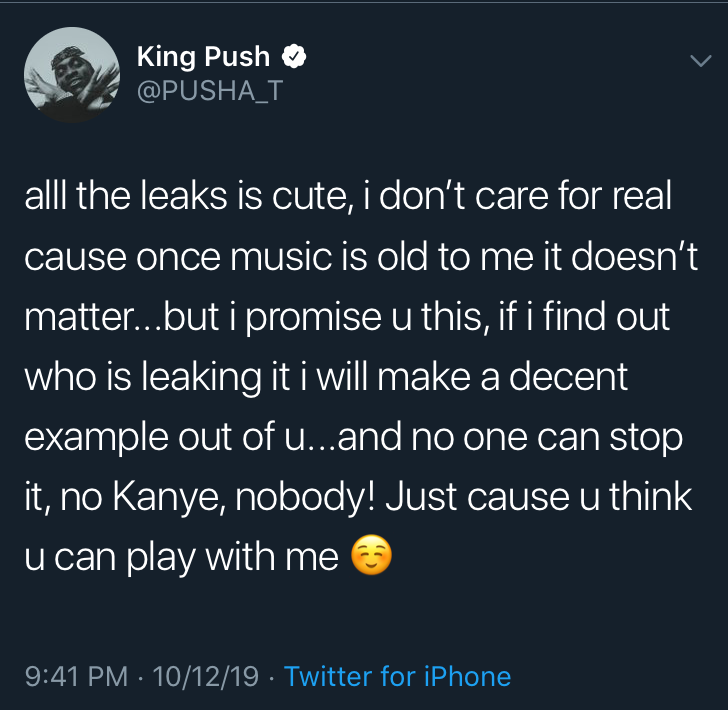 Twitter is having a field day with the Tweet as rumors circulate that Drizzy of all people, is responsible for the leaks that are potentially ruining the release of the upcoming projects. Pusha T on music leaks further’s the idea that trouble is ahead posting a couple more subliminal tweets of his own.

As projects go both Pusha and Kanye are scheduled to release music this quarter before the year is up.

Kanye is late on his music compilation Gospel album titled ‘Jesus Is King’ but it seems like it is business as usual for the Sunday Service choir. Pusha, on the other hand, is still in the production process. Yet, he has confirmed a new album is on the way. Kanye West was brought back to executive produce the album he explained while speaking to Ebro on his Beats 1 radio show in August august 30th 2019.

Previously On:   @Pusha_T And @KashDoll Get Ultra Bougie On 'Sociopath'

Pusha-T also revealed that he’s already completed nine songs on the album and that it should arrive before the end of the year.

DMX’s Posthumous Album ‘EXODUS 1:7’ Expected At The End Of This Month