[mks_dropcap style=”rounded” size=”52″ bg_color=”#915435″ txt_color=”#ffffff”]T[/mks_dropcap] ravis Scot has been collaborating with Virgil and Nike for awhile now. With a number of Air Jordan’s already released and more scheduled throughout the year, Nike has been visible leaning on both the Virgil and Travis brands to assist in bringing back the legendary Air Force 1 aka Uptowns brand to the mainstream shelves again.  All of Travis’s collabo’s maintain a brown silhouette accompanied by the occasional black and white with the ‘Cactus Jack’ logo, reverse swoosh and money pocket that conveniently matches his cargo pants outfit he’s been known to perform in.

The pair, appears to feature a multitude of patchwork, materials throughout the exterior. The sneaker encompasses a multitude of colors and textures along with suede mudguard wrapping around the leather toe box, a wool tongue and canvas on the heel panel.

Travis Scott posted the unseen color way of AJ1 collaboration which has been rumored over night to be expected to release later this year, or on a September 2019 date to be more exact. 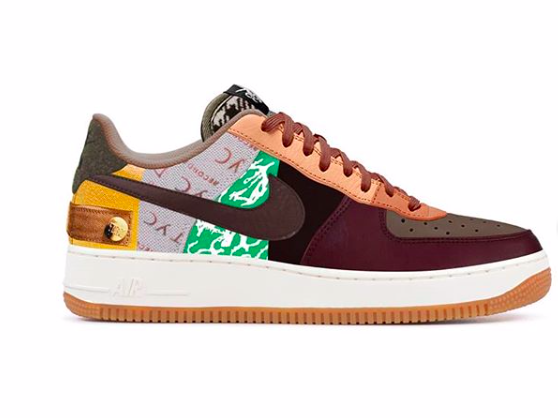