[mks_dropcap style=”rounded” size=”50″ bg_color=”#ff3a3a” txt_color=”#fcfcfc”]T[/mks_dropcap] he rumors have been made possible by a new collaborative between Supreme and the Jordan Brand.  For a couple of weeks ideas have circulated the internet about the collab with just in the last few hours, there has been some confirmation not from one account but two with similar designs.  The XIV or Air Jordan 14, an unlikely model originally released in 1998-99, because it is the classic sneaker silhouette that often maintain a simplified color-way throughout the years.

Characterized by a delicate chrome scheme and often finds itself dressed in a white or black with shades of Carolina blue/red or yellow on detail edges of the sneaker.  The Supreme collabo suggest a peculiar design adorned with silver studs on either sides of the sneakers.  With the inevitable, Supreme LOGO script placed on the fronts tabs and the removable tag with the Jumpan – Supreme cobranding.

Check out the leaks below if this is the completed design that will make its way to shelves it’s going to be a rough one finding them. 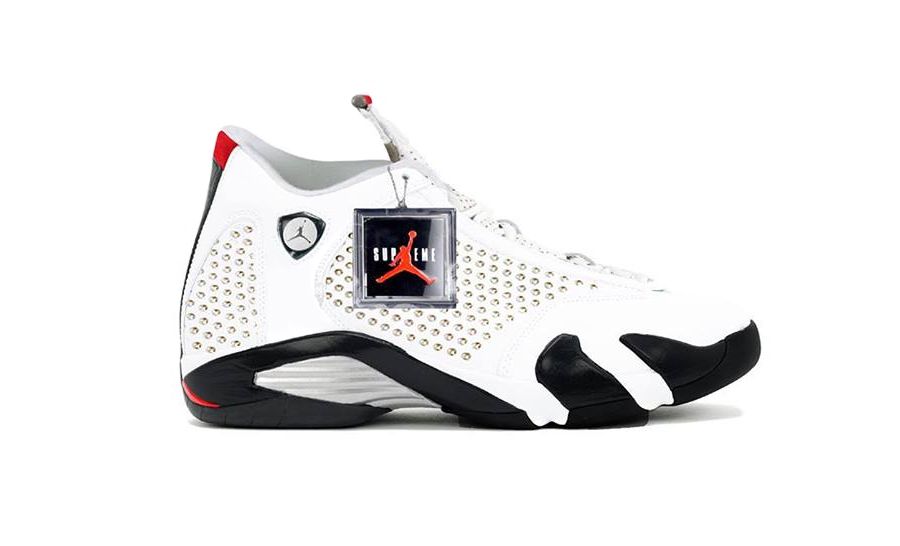 Peep the JUMP for a detail look..