Nike plans on having complete control over their ‘move to zero’ campaign by 2025 with the introductions of “ecodown’ activewear.

In a not so bold move, Nike previews an ‘ecodown’ jacket and two pairs of Air Force 1 sneakers. As a major brand for activewear, Nike should be able to introduce an entire season for a consumer focus on sustainability. Anything else seems just about lazy. I have to on the other hand applaud the flirtations that Nike has with its new ‘ecodown’ and sustainable campaign. The upcoming launch of the Marble Ecodown jacket for women is an item constructed as part of the branding efforts to fulfill their sustainability promise. Constructed of 100 percent recycled materials and featuring a transparent polyester shell in a grey marble colorway.

The press rleease on the new item reads, “We used a 100 percent recycled, transparent polyester shell to help keep plastic out of landfills. We also used 100 percent recycled Thermore Ecodown marble insulation. Because we made the shell and lining fabric out of a semi-sheer repel ripstop, we can still create a durable jacket that helps repel wind and water, and is comfortable to wear.” 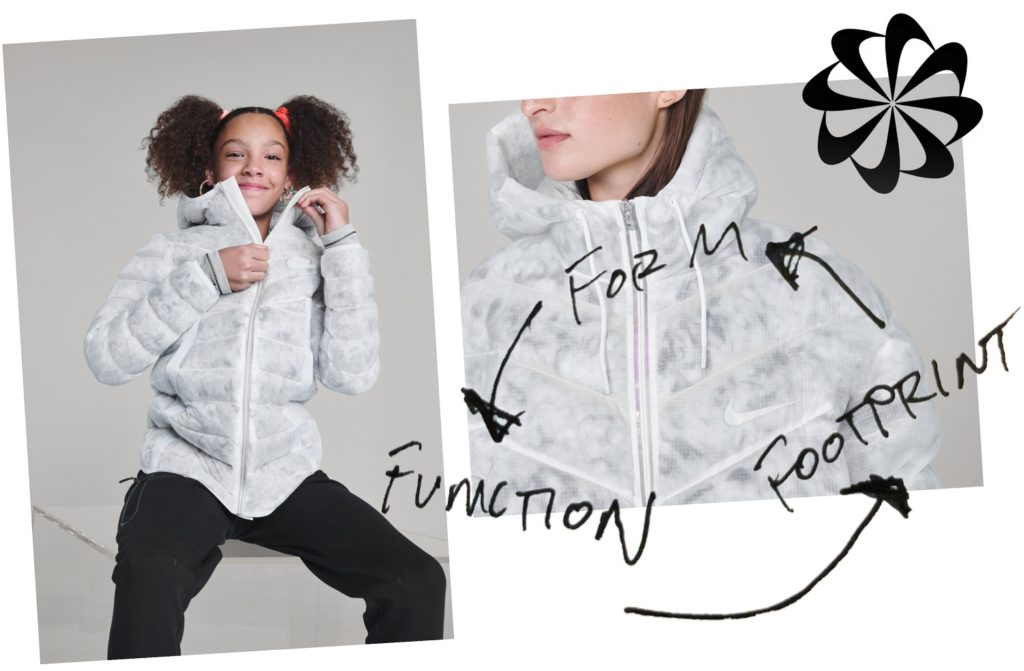 Nike Introduces the ‘Air Force 1’s Crater’ after the JUMP!

[bctt tweet=”Nike plans on having complete control over their ‘move to zero’ campaign by 2025 with the introductions of “ecodown’ activewear.” via=”no”]
Image courtesy of nike
66
VIEWS
ShareShare
Pages: 1 2